Beyond the Heavenly Kingdom

Beyond the Heavenly Kingdom

By Li Bo (aka Steven Leibo)

Jason Brandt is living in an age of uncertainty. He has found and married his love, Black Jade. He searched long and far for her; her previous marriage to a warrior-soldier yielding a young child named Mei-Ling. Jason and Jade’s marriage has led to the birth of a young boy named William. The whereabouts of Wu are unknown in the wake of the war between Manchu and Taiping. Jason is laboring as a journalist in an ever-evolving world. He wants to bring his family to America; his wife barely survived an attack on an orphanage that was spurred on by ignorance and racial bias. China is chock full of danger. Jason decides to head back to his birth home and reconnect with his father. His opportunities are increasing as his documentation of China and its people has been lauded by none other than Mark Twain, who begins a correspondence with Jason. Jason and his brood set off on an arduous but beautiful journey to the United States. The beauty is sullied by the hatred spewed at the Chinese in San Francisco as the immigrants are utilized as cheap labor by ruthless corporate leadership. The natives see the new arrivals as threats and ripe for oppression. Jason’s work as a journalist leads him to reconnect with Wu and assist him in rebuilding his life. The journey home is threaded through with encounters with Phineas Fogg and his wife, who are endeavoring to travel around the world in 80 days  partly in a balloon, and Jason also finds a financial opportunity with a financier who seeks information about China. The meeting with the financier in New York City is filled with promise for the future if all goes well. Mark Twain offers sage advice in regards to safety in Jason’s mixed marriage. Black Jade finds a niche in teaching language to kids, while Jason’s writing covers the mistreatment of the Chinese as replacement workers. The husband and wife begin to team up as lecturers, narrating their lives for mass consumption. Jason reconciles with his father, and his family adjusts to life in the United States. But will they be happy in their new environment?

Beyond the Heavenly kingdom is a worthwhile follow-up to The Heavenly Kingdom, a continuance of the adventure-filled romance. The reader is guided on a tour of the post-Civil War landscape, the newcomers brimming with awe and amazement at the sights. The beauty in some cases obscures the hard truths lying below the surface. The conditions highlighted on both continents are at times hard to read about but important nonetheless. This book is about love, acceptance, and endurance. A great sequel!!

Amazon Site for Beyond the Heavenly Kingdom 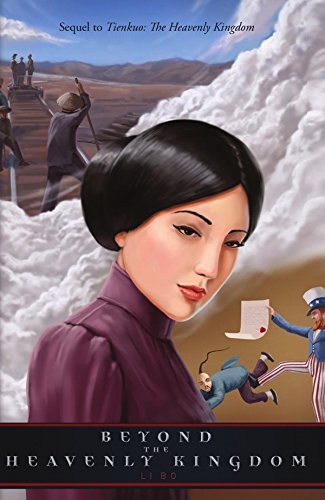